This is Crowley's Bentley in Good Omens 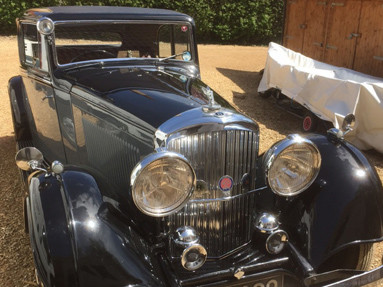 The Bentley Derby Coupe was officially launched in 1933. This was shortly after the Bentley company was acquired by Rolls-Royce. This model had SU carburettors and a cross-flow cylinder head. This made it a great sporting model.

It was in production from 1934 until 1936. It was a sports car that looked good and was very popular. Eddie Hall also drove one of these cars at the 1934 Tourist Trophy just before it was opened for the public to buy.

This sports car was praised by Ernest Walter Hives. The Bentley Derby Coupe had a top speed of 95 mph and was perfect for sports car enthusiasts. It had a 68 litre fuel tank and handled quite well on the road. It was replaced by a 4.5 litre in 1936.

Mary, named after my mother, has appeared in the Endeavour series of Inspector Morse and stars in the six part series of Good Omens by Terry Pratchett & Neil Gaimans. Now out on Amazon Prime & on  BBC2 from 15th January 2020. DVD also available

Donald Campbell owned her in the 1950's. Believed to be the only Thrupp & Maberley Derby Coupe in existence